Warriors Orochi 2 is a PSP game following as the second series for the Warriors Orochi game. There are 13 new characters added as the playable character and even some of them are new to "Warriors" game series. This game is run no problem on my Android phone.

Warriors Orochi 2 is a game released for Playstation Portable (PSP). This game is also playable on other device such as computers, Android & iOS phone / device, using PSP emulator software / application by dumping the game into a .iso ROM file.

Warriors Orochi 2 PSP game continues the story in the world created by orochi after the last battle that made Orochi killed. For the gameplay and graphic, dissapointly there is no major update. But, this game is added about 13 new playable characters, included some new characters even on "warriors" game franchise. And another thing, every characters now have up to 4 unlockable costumes (models) to choose.

There is some update to the weapon upgrade system on Warriors Orochi 2 PSP game. Now players can embed some special abilities / skills to the weapons, which can make a great advantages in the battle. However, to create some weapon skills require combined some treasures and weapons to sacrify. And so the treasures is needed for this, "treasure hunt" is one of mystery in this game as to obtain a treasure, it need to fulfill some conditions on the battle stage (trust me, some of them will make you frustrating). 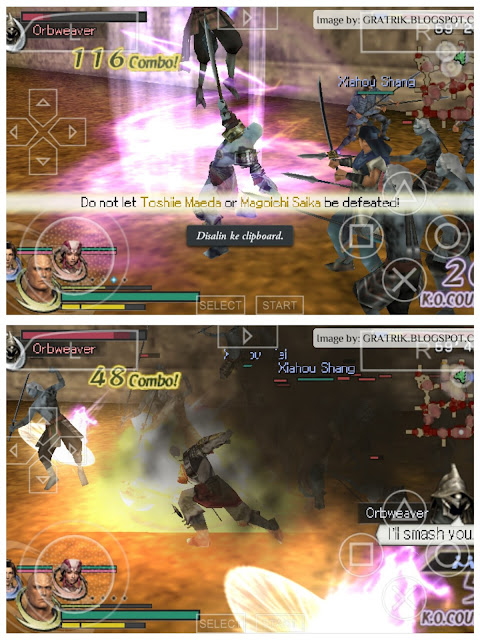 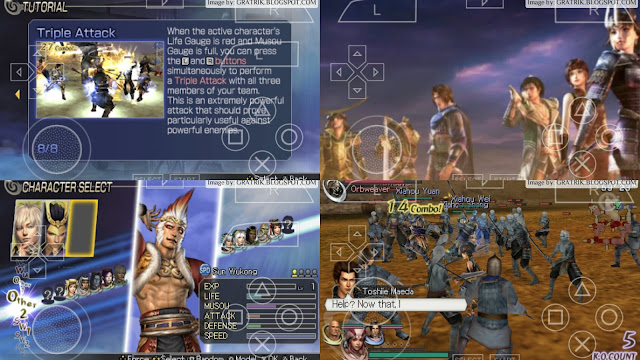 Few years have passed since the killed of Orochi. Now the new world Orochi's created is divided into regions each ruled by China Three Kingdom leaders, and the Japan warriors. Some of them take this peace moment to launch attack on another side for one goal, to fulfill the ambition to conquer this new world.

Although The Serpent King was killed, his leftover minions is still wandering out there trying to planned to resurrect their Lord by even on more powerful form called X-Orochi. Know this will not be going good, the Mystics come down to earth with the help of Dynasty and Samurai Warriors trying to finish the survived Orochi's minions and to prevent the resurrection of the Serpent King.