"PHH Superuser is the new player on the Android superuser / supersu app management. I am pretty confident this is a trusted supersu management because the project is open sourced. PHH Supersu is a modification / tweak from the open source Superuser project by Koushik Dutta (Clockworkmod) . PHH Superuser is created in hope to works on more device than Superuser can reach."

By using a superuser application, all apps that demand for root access must have been granted the permission first from the superuser app. And that method is by using superuser managements application to controll the root, and one of the newest is PHH Superuser. "PHH" is taken from its founder name, Pierre-Hugues Husson.

I think PHH Superuser is rooting Android device using "systemless" method. I can figure it because every I boot my Android device from TWRP recovery, it always says "device not rooted". In fact, the root is exist and all of my root application is working well.

If you love the Clockworkmod app and have tried the Clockworkmod Superuser rooting method did not work on your Android device, then you must try this method. Because the same thing is happened to my Samsung Galaxy V SM-G313HZ stock ROM. 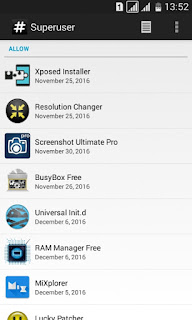 At older post I have share how to root Android using Chainfire SuperSu. That method is the most favorite of Android users, and because it have good root command compatibility make it never fail on giving permission and access to all root application on every Android device.
But since the recent news, Chainfire decide to transfer the ownership of SuperSu to relatively unknown and "shady" corporation who called themself Coding Code Mobile Technology (CCMT). Then I start to questioning the security and integrity of SuperSu, especially to the new owner CCMT.

News spreading, the rumors of folks at Android community is also flying. Who is CCMT? Is they trusted? But all the rumors questioning their integrity just gotten bigger and bigger as why they even do not came out and "show their face" to the Android community to make some clarification and declare their integrity holding such a powerfull root management application called SuperSu.

But CCMT is still just a shady corporation to me now. And I am very care to my security and privacy. That is why also the folks at XDA is start seeking alternative superuser and rooting method, especially the one who declare that he is an open source superuser app. Now, PHH Superuser is my number 1 choice on root management app on my Android phone.

Read more on the official thread of PHH Superuser on XDA Forum.